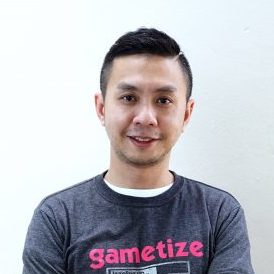 This is a 100% fictional story with a pinch of humour based on an untrue story where Elon Musk challenges Keith in a dim sum restaurant in a chance encounter to design and gamify the customer advocacy campaign for Tesla before he finishes his lunch.

Keith is a firm believer of the power and organic reach of coupling the concepts of gamification + customer advocacy to engage, recognize, and supercharge any brands' superfans to create exponential marketing impacts with low cost. He will explain the premises that can make this campaign payoff big time, Gametize's 5D framework to approach gamification from a problem solving + design thinking approach, and shows how he created the campaign real-time on Gametize.com to whip out a prototype demo for Tesla.

Disclosure: There will be some subtle and shameless brand placement in this story, and you get to complete part 2 of this script.

Thanks to our day sponsor

Keith Ng co-founded Gametize (with his best friend Damon Widjaja, and later Brenda Nicole Tan), a gamification platform to motivate behaviors through challenges and rewards such as in recruitment, learning & development, marketing and community advocacy. Gametize won funding in a reality TV show (Angel’s gate), the People’s Vote in IBM’s Asean Smartcamp 2013, and SBR’s 2015 20 hottest startups in Singapore. Today, the platform is powering fun for more than 300,000 users totalling over 15 million challenge completions.

Keith was nominated as one of the most influential people in gamification globally by Gamification Summit (2014), as well as the top 100 gamification innovator/consultant by Sparkah. He designed Gametize’s gamification frameworks, and speaks on gamification globally, including Gamification Summit in San Francisco, HR Congress in Manila, and Loyalty Summit, in Mumbai. His interests are in using game thinking and positive psychology to solve engagement problems, and designing extremely simple user experience for people to get hooked. Motivation theories intrigues him as much as learning about artificial intelligence and scaling methodologies

Prior to co-founding Gametize, Keith coded/sold a MLM software at 18 before his military drafting. He then completed his BBM (Finance) and BSc (Information System) on a DFS Scholarship in Singapore Management University, ending his final semester on exchange in Katholieke Universiteit Leuven, Belgium studying arts and the Flemish language. His “Richard Bartle’s Player Type” would be Explorer and Achiever; he lives for his Tuesday evening futsal games, and plays Counter-Strike and the Rubik’s cube sometimes (which he struggles immensely with). He is also passionate about craft beer and you might catch him beertending and washing glasses at a beer shop once a week in Chinatown Food Complex.